Biodiversity in the Swedish forests – what’s that?

It means everything living in the forests, plants and animals. There are more than 21,300 different species in the Swedish forests today with unique genetic make-ups. In addition they have different requirements for their habitats in order to survive and reproduce. The variation of species, genetic make-ups and habitats represents biodiversity. 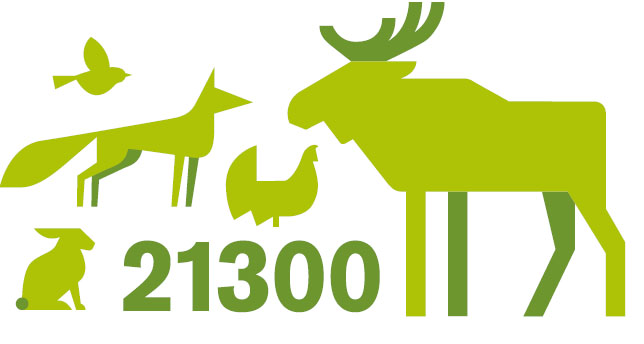 How is biodiversity protected by Swedish forestry?

Larger and smaller areas of forest are set aside where no felling takes place. But biodivesity is also protected where felling is done. For example by using machinery with less of an impact. And by leaving and not felling in sensitive parts, areas and habitats, for example next to flat rocks, bogs and watercourses.

Measures taken to protect water include, for example:

To benefit the various habitats in the forests, it is particularly important to leave dead trees, both standing and lying on the ground. Swedish forestry has focused particularly on increasing standing dead wood since the 1990s. The volume of such wood on productive forest land today is 172 million m3 or 7.7 m3 per hectare. 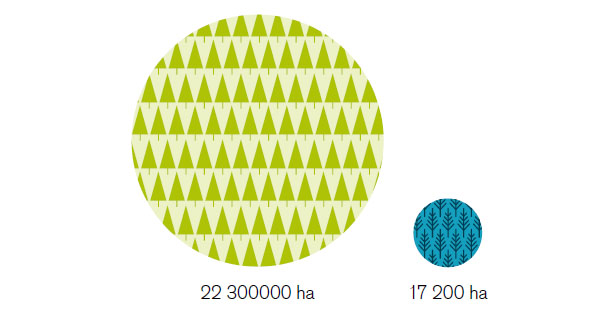 How large a part of Swedish forests is protected?

Quite a lot, altogether just over 2 million hectares. That’s almost a tenth of all forest in Sweden. Half is protected by law, for example forests in national parks and nature reserves. Likewise forest where there are woodland key habitats and red-listed species, areas that are particularly important for nature conservation and environmental reasons.

The other half is what is known as voluntary set-aside. These are areas that individual forest owners of their own accord and without financial compensation have chosen to exempt from forestry, often for environmental reasons such as a wish to conserve valuable natural amenities. This is how all protected forest on productive forest land in Sweden is divided up: 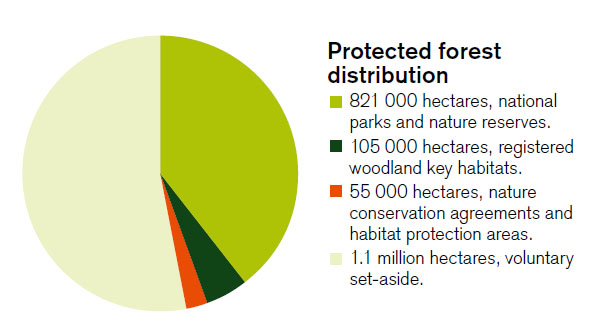 There are no mountains of waste from Swedish forests, either on land or in the seas

A great advantage of the forests and products from them is that they are 100% biodegradable. That is say, all forest and wood left behind decomposes and is then completely absorbed by nature. Eventually the dead forest turns into soil, in which new forest can then emerge – a constantly ongoing, natural cycle.

Plastic, which is one of the most common materials, takes a very long time to break down. It can take hundreds of years for a piece of plastic that has ended up in nature to disappear. And plastic litter is one of our most noticeable environmental problems. Studies show that there are up to 15 million tonnes of plastic in the seas alone. 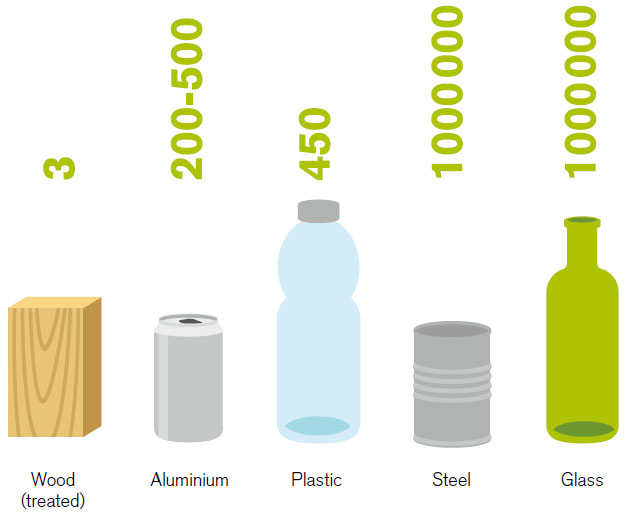 The forests can instead become energy of benefit to the climate

Degradability, the ecocycle and renewability are good things in themselves with the forests, but can also benefit the environment and the climate in other ways. An important element is that residuals such as stumps and felling residuals can become biofuel and provide climate-friendly heating and energy.

The use of forest fuel has increased steadily in Sweden since the 1990s. At that time carbon dioxide tax on fossil fuels was introduced, and bioenergy was granted exemption from energy tax. This made it more financially worthwhile to utilise fuel from the forests.

Today this use has really taken off, and the equivalent of 20 TWh (terawatt-hours) of forest fuel a year is supplied for heating and energy. That’s enough to heat almost all the detached houses in the country!

A consequence of plastic pollution in the environment is the health problems it can cause. Plastic can leach chemicals that affect the environment, animals and humans. An example is the studies pointing to increasing levels of environmental toxins in our bodies.

Another example is that in lakes and seas small plastic fragments become carriers of hazardous substances. These microplastics can be mistaken for food by animals and fish living in the water and then be passed on to other humans and animals.

Both leaching of hazardous substances and unhealthy fragments also apply to other materials such as glass, steel and aluminium, for example in packaging. But this problem does not exist with regard to forest-based and wood-based materials.

Biodiversity in the Swedish forests – what’s that?

It means everything living in the forests, plants and animals. There are more than 21,300 different species in the Swedish forests today with unique genetic make-ups. In addition they have different requirements for their habitats in order to survive and reproduce. The variation of species, genetic make-ups and habitats represents biodiversity.

On the subject of forest fuel, did you know that...